It’s been a while, and we hope you all are happy and healthy! The past months haven’t been easy, for everyone. But despite Corona, life must go on eventually. A great example is our concept artist Johanna, who just gave birth to a lovely boy. Our second production baby, by the way.

Johanna will be on maternal leave for about 6 months, so we are happy to have Katharina join our team and take over the role of creating concept art, illustrations, 2D magic! One week in, she already proved her skills, and she’s a jolly good fellow to have around. True Carrot Spirit! Now find out what she has to say about herself… 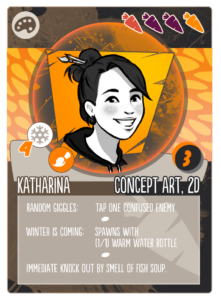 Who are you and what do you do at Chasing Carrots?
Helloooooo! I’m Katharina and I’m mainly responsible for 2D stuff, Illustrations and Concept Art!

What is the best about being a game developer?
Being able to actively shape the user experience! For me it’s obviously especially the art style. And also getting to meet amazing people in the gaming industry. I think the general feel of the industry and the way people work together is very different from other industries. It’s more…cozy 🙂 and warm

How and why did you become a game developer?
I initially planned on world domination. That plan failed for various reasons, so I decided to strive for the second best thing: becoming a game developer. I got into gaming through my older brother as a kid. We had quite the age gap and it was basically a really nice way to connect and do something together despite the difference.

What did you do before Chasing Carrots?
I studied Media informatics & interactive entertainment, got my bachelor’s degree, proceeded to work as a concept/2D Artist for the mobile gaming developer “Fluffy Fairy Games” (today Kolibri Games) in Karlsruhe on a game called “Idle Miner Tycoon”. After that I worked as a graphic designer for the gaming publisher Kalypso Media Group. So my professional career has always been within the gaming industry.

What are your all-time favorite games?
The Trine series, League of Legends, Stardew Valley, Ori and the Blind Forest, Portal 2… I don’t know, it’s really hard to choose. Though I actually really prefer multiplayer games because I’m more of a socializer. And I absolutely suck at shooters.

Who or what is your favorite band/music?
That is hard to pinpoint, I like a lot of things! Electro Swing for starters! And also chill old stuff like Ray Charles, Frank Sinatra…you name it. Too many things and directions to count. Whatever makes me happy.

If you could be a game character, you would be…?
Most gaming characters have to fight and die at some point, some even several times. I am not too fond of that. I prefer a relaxed and chill life with not too much trouble so I’d actually go for the rather boring but chill farmer life on Stardew Valley, where my ghost-grandpa silently judges me for whatever I accomplish or… not accomplish 😀